Hello and welcome to a quick post that I hope provides a little insight into how I and why I compare the works of George R.R. Martin within its own world.

The answer to GRRM’s work is in GRRM’s works. This furniture rule is the connecting thread to his own style of writing. This is stronger than what real world influences could be, or what we want them to be. His world, his rules:

“In A Song of Ice and Fire, I take stuff from the Wars of the Roses and other fantasy things, and all these things work around in my head and somehow they jell into what I hope is uniquely my own.” –GRRM

So here I am with a test video documenting my horrid ‘read out loud’ skills. This is a long standing and well known fact in the critique groups I work with (sorry, authors). Because I am reading a small section of a larger passage, I am also going to provide the text after the video.

(Sorry about that awful video, haha. Didn’t mean to torture ya with my five minute/no prep/first video ever idea. I can only promise to torture you more in the future when you least expect it.)

Now, this doesn’t mean that A Song of Ice and Fire is secret SciFi. No, that’s just the furniture. ASOIAF is part of Martinworld, which is made up of all of George R.R. Martin’s works. ASOIAF is not secretly part of Thousand Worlds, either. Forget those conspiracy theories and enjoy ASOAIF for the magnum opus that it is, after all, GRRM has been working for decades to perfect it.

Also, I did speak to Game of Owns about Martinworld at the beginning of the year before Earth started its 2020 cataclysms. Listen here, if you want. 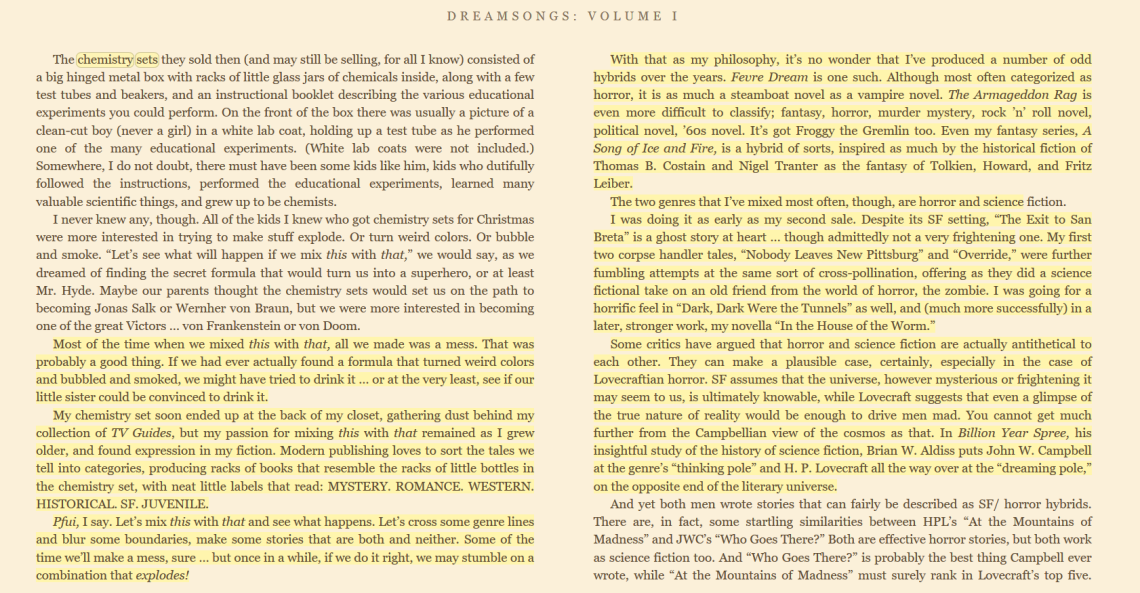 One might argue that Richard III is rightfully about the Wars of the Roses, not the fascist movements of the ’30s. One might also insist that Coriolanus should be set in Rome, not Paris. One might point out rather forcefully that Mercutio was not, in fact, a black drag queen. All that is true, as far as it goes.

And yet … sometimes … more often than not … the Bard’s plays still work, no matter how bizarrely the genius directors decide to trick them out. Once in the while, as in Ian McClellan’s film of Richard III, they work rather magnificently.

And for that matter, my favorite science fiction film of all time is not 2001: A Space Odyssey or Alien, or Star Wars, or Bladerunner, or (ugh) The Matrix, but rather Forbidden Planet, better known to us cognoscenti as The Tempest on Altair-4, and starring Leslie Nielsen, Anne Francis, Walter Pidgeon, and Bat Durston.

But how could this be? How could critics and theatergoers and Shakespeareans possibly applaud these Bat Durston productions, rip’d untimely as they are from their natural and proper settings?

The answer is simple. Motor cars or horses, tricorns or togas, ray-guns or six-shooters, none of it matters, so long as the people remain. Sometimes we get so busy drawing boundaries and making labels that we lose track of that truth.

Casablanca put it most succinctly. “It’s still the same old story, a fight for love and glory, a case of do or die.”

William Faulkner said much the same thing while accepting the Nobel Prize for Literature, when he spoke of “the old verities and truths of the heart, the universal truths lacking which any story is ephemeral and doomed—love and honor and pity and pride and compassion and sacrifice.” The “human heart in conflict with itself,” Faulkner said, “alone can make good writing, because only that is worth writing about.”

We can make up all the definitions of science fiction and fantasy and horror that we want. We can draw our boundaries and make our labels, but in the end it’s still the same old story, the one about the human heart in conflict with itself.

The rest, my friends, is furniture.

The House of Fantasy is built of stone and wood and furnished in High Medieval. Its people travel by horse and galley, fight with sword and spell and battle-axe, communicate by palantir or raven, and break bread with elves and dragons.

The House of Science Fiction is built of duralloy and plastic and furnished in Faux Future. Its people travel by starship and aircar, fight with nukes and tailored germs, communicate by ansible and laser, and break protein bars with aliens.

The House of Horror is built of bone and cobwebs and furnished in Ghastly Gothick. Its people travel only by night, fight with anything that will kill messily, communicate in screams and shrieks and gibbers, and sip blood with vampires and werewolves.

The Furniture Rule, I call it.

Ask Phyllis Eisenstein, who has written a series of fine stories about a minstrel named Alaric, traveling through a medieval realm she never names … but if you corner her at a con she may whisper the name of this far kingdom. “Germany.” The only fantastic element in the Alaric stories is teleportation, a psi ability generally classed as a trope of SF. Ah, but Alaric carries a lute, and sleeps in castles, and around him are lords with swords, so ninety-nine readers out of every hundred, and most publishers as well, see the series as fantasy. The Furniture Rules.

Ask Walter Jon Williams. In Metropolitan and City on Fire he gives us a secondary world as fully imagined as Tolkien’s Middle Earth, a world powered entirely by magic, which Walter calls “plasm.” But because the world is a single huge decaying city, rife with corrupt politics and racial tensions, and the plasm is piped and metered by the plasm authority, and the sorcerers live in high-rises instead of castles, critics and reviewers and readers alike keep calling the books science fiction. The Furniture Rules.

Peter Nicholls writes, “… SF and fantasy, if genres at all, are impure genres … their fruit may be SF, but the roots are fantasy, and the flowers and leaves perhaps something else again.” If anything, Nicholls does not go far enough, for westerns and mysteries and romances and historicals and all the rest are impure as well. What we really have, when we get right down to the nitty-gritty, are stories. Just stories.

I have started a book club re-read for the older works of George R.R. Martin for purposes such as research, scholarship, and teaching. I own all copies of material that is used for this book club. If you have not yet read a story listed, please check with your local bookstore for your own reading material to purchase. (Indie Bookstore Finder) The full list of GRRM stories outside of the A Song of Ice and Fire series that I have read can be found on this page here.

If this has done more to whet your tentacles with a seething desire to feed upon the organic noodle matter of more stories, peruse the main Book Club page for the most up-to-date list, or from the list below:

Published by The Fattest Leech

The She-Bear has begun to sing over at-> fattestleechoficeandfire.com https://fattestleech.wordpress.com View all posts by The Fattest Leech