“No matter how far back Ned searched in the brittle yellowed pages, always he found the gold yielding before the coal.”

EDIT: I know about the new House of the Dragon ( #HoTD ) show that is coming to HBO and I know that the show-runners race changed Velaryons for their own (non-canon) reasons, and that is ok because the two worlds of lore have nothing to do with each other. Viewers should have expected that as the previous GoT show also race changed many characters. It’s what happens, no biggie, enjoy what you want. Also, as a reminder, this website is not about the show and show discussion is not encouraged./

What am I talking about here?

This isn’t a very long-winded concept, but I have taken a little time to give you a few quick jumps to the discussion topics:

Hair color in A Song of Ice and Fire (ASOIAF), as well as ALL of George RR Martin’s stories, is wildly important. From false colors, to honey-colored hues, to shades of white, grey, and silver, it is a clue not to be underestimated. There seems to be a formula that the first born child of a Targaryen+non-Targ mix parentage always physically favors the non-Targ parent, while the second born and subsequent children are a little more of a mix of both.

This is done for literary purposes; to be able to hide a certain child/ren in plain sight.

When I say Targaryen looks, obviously I mean Valyrian looks of the pale complexion, pale metallic hair in silver or gold, eyes in various shades of purple. As GRRM keeps telling readers inside and out of the story proper, being Valyrian is a race, not an ethnicity. Valyria is the ancestral home of House Targaryen, House Celtigar, and House Velaryon in addition to about forty other houses that practiced hierarchical incest (read here the why’s of it in Martinworld). If anything, knowing all of Martin’s works, I’d guess that Targaryens used the Velaryons as a type of ‘brood mare’ situation to continue to keep the bloodlines of Valyria “pure”. This was how it was done in GRRM’s story Bitterblooms.

Would George be so obvious about something he’s planted in the series when it comes to looks and lineage? Yes. When asked at a t 2015 Dayton, Ohio signing about Brienne being related to Duncan “Dunk” the Tall, George responded as so:

Asked if he’ll ever tell which character is Dunk’s descendent. Got a rather acerbic, “I gave a pretty strong hint in the new book,” to which I sheepishly replied “Yea, but I read it real fast, in three days.”” I told him I suspected Brienne but thought that she was too obvious and that he’d be more subtle than that and he said, “You think?” Coy bastard. -source

This in-person response was so very much like GRRM’s main character’s response in Nightflyers. When the suspicious crew of the Nightlfyer start to theorize about the origins of Royd eris, they concoct many fanatical theories, and Royd responds as so:

“I liked your guess about the gas giants,” Royd said. “Sadly, the truth is less dramatic. I am an ordinary Homo sapien in middle age. Sixty-eight standard, if you require precision. The hologram you see before you is the real Royd Eris, or was so some years ago. I am somewhat older now, but I use computer simulation to project a more youthful appearance to my guests.” –source

I first proposed this idea years ago on the Westeros.org forum. A common misconception about this theory I want to clear up right away is that Martin is using his own world genetics, not our real world genetics. This is a carryover idea from his SciFi specific preferences, just reformulated and simplified to fit a fantasy story setting. The other misconception some readers have is that this “formula” applies to all people of Westeros. Nope. Just the Targaryens, as the other families have their own simplified formula the author uses for symbolic, literary purposes.

A symbol is indeed the only possible expression of some invisible essence, a transparent lamp about a spiritual flame; while allegory is one of many possible representations of an embodied thing, or familiar principle, and belongs to fancy and not to imagination: the one is a revelation, the other an amusement.

Another reason for this non-real world genetic need in the literary world of ASOIAF is that Daenerys Targaryen is the first and the “ultimate” Targaryen, all of the rest from in-world history are just there to lead up to Dany. It is George’s reverse engineering of the ASOIAF world after he had already written Daenerys (firstly), then Viserys and other Targaryen mentions in the main (canon) books.

The physical looks and behaviors of Dany herself come from his character Cyrain of Lilith and Ash in his story The Glass Flower. There is also quite a bit, physical and archetypal, of Goldenboy from the story Starlady in Dany and Valyrians. Both of these character-types also have the proximity telepathy/mind control powers such as George planned (and kept) for Daenerys and the Targaryens. Pyrokenisis in the case of the Targaryens in general, and Pyro+mental persuasion for Dany as being able to “bend to her will” the people around her (per GRRM as he planned Dany from the beginning).

The World of Ice and Fire – The Reign of the Dragons: The Conquest

The Aegon who is known to history as Aegon the Conqueror and Aegon the Dragon was born on Dragonstone in 27 BC. He was the only son, and second child, of Aerion, Lord of Dragonstone, and Lady Valaena of House Velaryon, herself half-Targaryen on her mother’s side. Aegon had two trueborn siblings; an elder sister, Visenya, and a younger sister, Rhaenys. It had long been the custom amongst the dragonlords of Valyria to wed brother to sister, to keep the bloodlines pure, but Aegon took both his sisters to bride. By tradition, he was expected to wed only his older sister, Visenya; the inclusion of Rhaenys as a second wife was unusual, though not without precedent. It was said by some that Aegon wed Visenya out of duty and Rhaenys out of desire.

Also, pale and silver/gold with purple eyes is not the same as albino. Superficially they seem the same, but to readers who decode the details, they function quite differently from each other. Martin has many actual specified albino people across his 72+ works, Brynden Bloodraven Rivers as the first obvious ASOIAF example, but what he developed using his own ideas for his own world for Valyrians is for specific literary fantasy reasons.

I cannot say this enough, GRRM’s worlds follow his own “scientific” rules. Latitude and geography have little to do with the results we see in real life. Characters are the way GRRM needs them to be.

GRRM is the God: his world, his rules. 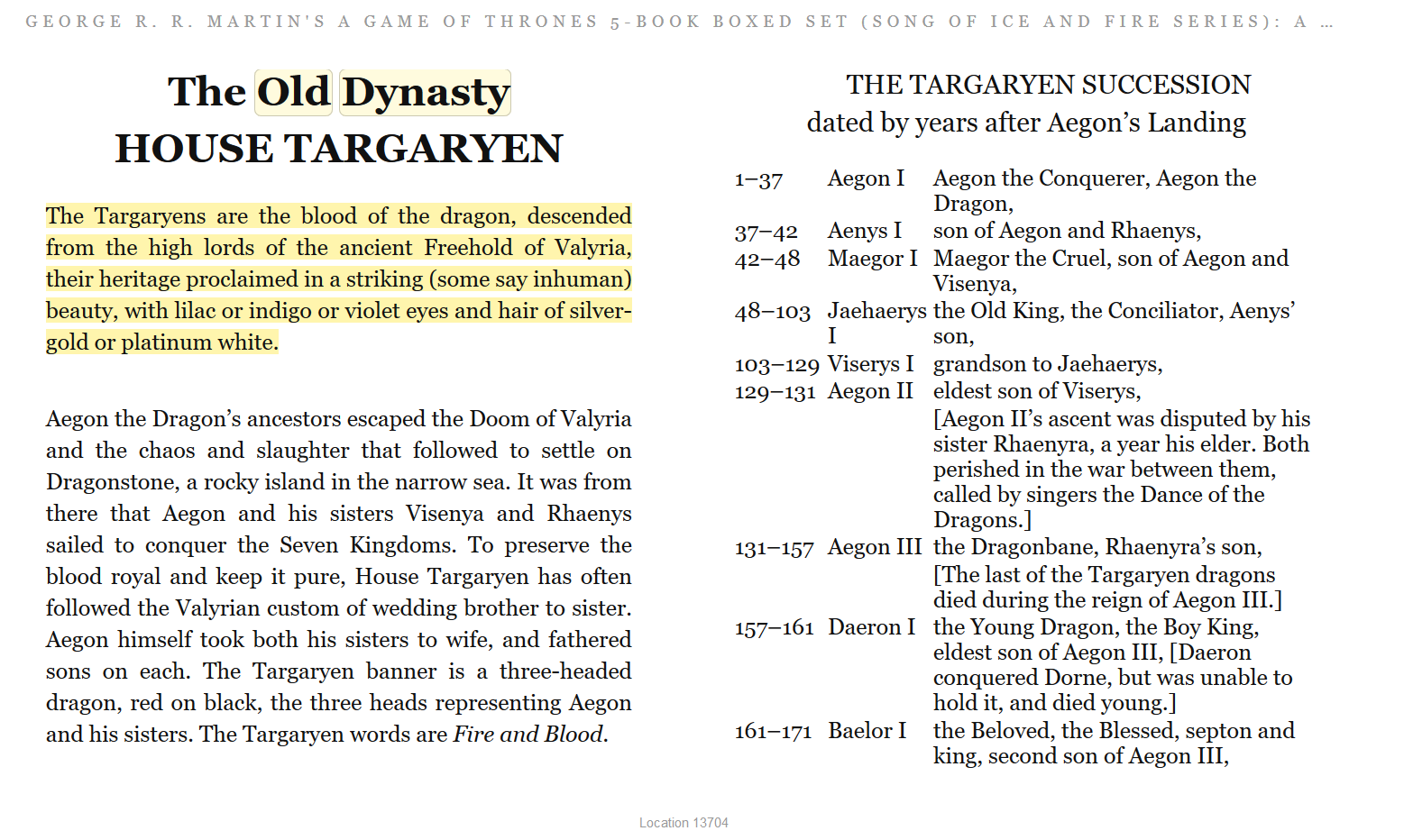 In the Baratheon mix, we always get coal before gold. I think it is the same for the first born to a Targaryen + Non-Targ baby. I was lucky enough to ask George about this theory and he pretty much said yes (as much as he says ‘yes’) in a tricky sorta way as he asked me the details on this theory and even reading my own note card that I had with me.

The book series has to rely on other genetic factors and methods of DNA testing that we do not use or rely upon in our own world (reality is such a silly place!). Therefore, GRRM has to somehow “show” that certain characters are related other than just by looks or swab testing. This is where personality comes in to play. Of course, there is always going to be that one exception thrown in there in attempt to throw things off, but exceptions are not the basis for reality and usually have their own reason why. I am aware that there may be a little crossover with symbolism, something I kinda expect as it’s par for the Martin course, but you have to continue to investigate why.

Speaking of Valyria… right from the start I wanted the Targaryens, and by extension the Valryians from whom they were descended, to be a race apart, with distinctive features that set them apart from the rest of Westeros, and helped explain their obsession with the purity of their blood. To do this, I made a conventional ‘high fantasy’ choice, and gave them silver-gold hair, purple and violet eyes, fine chiseled aristocratic features. That worked well enough, at least in the books (on the show, less so). –GRRM

The crux of this theory is simple:

The meadow was a churning mass of people… Across the field, the viewing stand was filling up with highborn lords and ladies, a few rich townfolk, and a score of knights who had decided not to compete today. Of Prince Maekar he saw no sign, but he recognized Prince Baelor at Lord Ashford’s side. Sunlight flashed golden off the shoulder clasp that held his cloak and the slim coronet about his temples, but otherwise he dressed far more simply than most of the other lords. He does not look a Targaryen in truth, with that dark hair. Dunk said as much to Egg.

“It’s said he favors his mother,” the boy reminded him. “She was a Dornish princess.”

This list can be updated as new information is provided in comments below:

Targaryens mixes who look Targaryen yet have “identity issues”, and by identity issues I mean something like not accepting current Targ rule, going against family norms, etc:

Other Targaryen mixes with no description:

Here is a fantastic post on page 3 of the original thread that shows a more scientific take on this theory. Please read here.

Original Westeros.org thread linked to here if you want to read more, including some feedback, because of course I could be wrong about much of this.

I have started a book club re-read for the older works of George R.R. Martin for purposes such as research, scholarship, and teaching. I own all copies of material that is used for this book club. If you have not yet read a story listed, please check with your local bookstore for your own reading material to purchase (Indie Bookstore Finder or Bookshop.org). The full list of GRRM stories outside of the A Song of Ice and Fire series that I have read can be found on this page here.

It takes a while to transcribe and then note each story for research purposes, even the really short ones, so this page will be quietly updated as each re-read is added. Make sure you subscribe for updates.

If there is a story in particular you would like to ask about, feel free to do so in comments below.

If you prefer to listen to a podcast that gives synopsis and analysis of stories written by George R.R. Martin, please consider the new group A Thousand Casts to accompany your ears. Twitter or Podbean.