I decided to break this song out in to its own page because I tend to refer back to it often and realized I needed an unobstructed resource page. I did cover this song in the Jon the Bear essay, as well as all of the Jon and Val details from the main Jon page. Or, you can read a little more about the literary origins of Val across time in Martinworld.

First, to pull from A Song of Ice and Fire, we have some examples of alchemy going on throughout. A something into something exchange. Well, there is a notion that honey is sunlight changed into gold. Royalty. If Val inherited Dalla’s “royal” clothes, then Val could have inherited Dalla’s royal jewels, amber. Both honey and amber have similar royal healing qualities. As is salt. The idea that to be “above the salt” is a sign of high social rank or royalty. We will have to keep our eyes open in The Winds of Winter for the amber to pop back into the story.

Second, and perhaps more humorously, from the main series we have the song of The Bear and the Maiden Fair. A stanza analysis shows the start of Jon’s relationship to Val, the three mutineers at the “for the watch” moment, the goat that follows them to the “fair” could be a form of R’hllor (also called the Black goat), the honey hair, and the courtship ritual of the free folk that Jon and Val follow. Now, I personally do not think this song hints at the entire Jon+Val relationship, just a few key points to the body of the relationship. This song also plays in to some of the secondary story-lines like Jaime and Brienne in a similar, but personalized way. There is more to come: 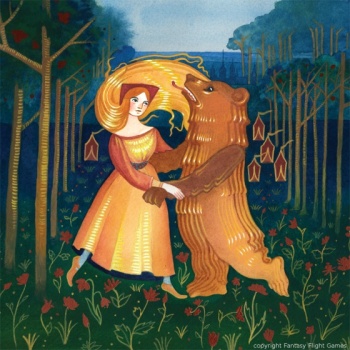 A bear there was, a bear, a bear!
all black and brown, and covered with hair.
The bear! The bear!
•    This black bear is Jon all covered in his NW black furs.
Oh come they said, oh come to the fair!
•    This is the trick in the taboo bear hunt, as described here. You cannot let the bear know he is to be killed. The word “Fair” also means judgement (to be fair), and this is what it seems like Marsh and Co are doing, passing judgement on Jon.

…
Three boys, a goat and a dancing bear!
They danced and spun, all the way to the fair!
The fair! The fair!
•    Three boys = Marsh, Wick Whittlestick, and the third knife in the back.
•    The goat could be Val, a woman of the free folk, the reason why Jon was stabbed. Jon’s first glimpse of Val from his spyglass while atop the wall, Val is milking a goat. However, Bowen Marsh could be the scape-goat, a puppet used by the fiery hand to thrust the knife.
•    The fourth knife Jon “never felt” = Melisandre, the fiery hand of R’hllor. The “dancing” bear is Jon fighting (for his life?), because in ASOIAF, to dance means to fight.

Oh, sweet she was, and pure and fair!
The maid with honey in her hair!
•    This is Val, for sure. Honey hair.
•    Jon refers to Val’s honey-colored hair three times; ASOS/ Jon X, ADWD/Jon III, ADWD/ Jon XI.
…
The bear smelled the scent on the summer air.
•    This is the scent of desire to mate.
…
He sniffed and roared and smelled it there!
Honey on the summer air!
Oh, I’m a maid, and I’m pure and fair!
I’ll never dance with a hairy bear!
A bear! A bear!
I’ll never dance with a hairy bear!
The bear, the bear!
Lifted her high into the air!
•    Jon puts Val up in Hardin’s tower to be guarded by Wun Wun. This impresses Val. Also, the free folk tradition of “stealing” is their version of courtship. The rumors of those south of the wall twist it into something bad, when it is not. In stealing, the woman is supposed to put up a fight and to “dance” is synonymous with “fight”. There are “rules” to free folk marriage/ stealing.

The bear! The bear!
I called for a knight, but you’re a bear!
•    Ser Patrek tries to steal Val but gets killed himself. When Jon hears the screams of Ser Patrek, his first thought is of Val (ADWD/ Jon XIII).
A bear, a bear!
All black and brown and covered with hair
She kicked and wailed, the maid so fair.
•    This is the wilding tradition of stealing your bride, and the bride putting up a fight as a sign of her independence and strength. The maid makes the final decision in “stealing.” We will have to wait and see how far the author will take this analogy in the main story.
But he licked the honey from her hair.
•    Reminiscent of the “lord’s kiss” Jon gives to Ygritte while down in the cave.

Her hair! Her hair!
He licked the honey from her hair!
Then she sighed and squealed and kicked the air!
•    Ok, this should be fairly self-explanatory. The honey licking, the squealing, etc… yes, the maid accepts the bear and this is consummation.
My bear! She sang. My bear so fair!
And off they went, from here to there,
•    This verse possibly follows certain theories that Val will be used to lure Jon out of Castle Black and will chase her across the north to either Winterfell or Dreadfort, or even to re-take Queencrown from the destruction “Good” Queen Alysanne brought down on the area. Also, I believe this “chasing Val” theory will link to the tale of Night’s King, HOWEVER, the tale we know of a sinister Night’s King is tainted, exaggerated and not true as told.
The bear, the bear, and the maiden fair.
•    And, they are paired off together. The honeymoon. Jon also describes Val like a moon. This units the two.

Thanks for reading along with the jambles and jumbles of the Fattest Leech of Ice and Fire, by gumbo!